The great cry of Easter morning is, ‘He is alive!’

When Mary and her friends arrived at the tomb where Jesus’ body had been placed following the horrors of Good Friday they did not find a body to embalm. Instead they were confronted with a void occupied only by some folded grave clothes. 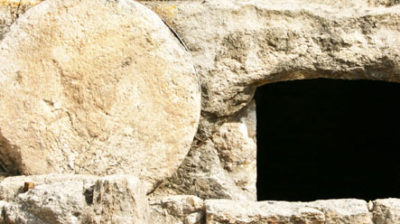 The panic gradually gave way to confusion and anger as Mary declared to the supposed gardener, ‘Sir, if you have carried Him away, tell me where you have laid Him.’ When she heard the reassuring, love-filled reply of, ‘Mary!’ spoken in a familiar voice, the realisation dawned that this was Jesus. Hope was birthed in her grieving heart as she realised that the greatest comeback in human history had been achieved. The grave had indeed been conquered: Jesus was alive!

Is He really who He says He is?

The gospel of John details seven sayings of Jesus which all begin with ‘I am’. These are among the most familiar of His teachings. What is fascinating in the light of Easter Sunday is that they all refer to life:

‘I am the light of the world. Whoever follows me will not walk in darkness, but will have the light of life.’ (John 8:12)

‘I am the door. If anyone enters by me, he will be saved… The thief comes only to steal and destroy. I came that they might have life and have it abundantly.’ (John 10:9, 10)

‘I am the resurrection and the life. Whoever believes in me, though he die, yet shall he live.’ (John 11:25)

Good Friday and a dead Jesus brought these claims, and much of the rest of His teaching, into question. How could a dead person genuinely offer life? If Jesus was subject to death and decay, surely He was simply human just like the rest of us?

However, the empty tomb of Easter Sunday placed all of these claims firmly back in play. If Jesus is alive, having conquered death, then surely He can offer that hope to us? Maybe He is the bread of life which will feed us forever? Maybe He is the way, the truth, the resurrection and the life which leads us to the Father? Maybe He really is the true vine in whom we can live and bear fruit? Maybe He is the light of the world who brings life to all? Maybe He is the good shepherd who freely lays down His life only to take it up again in order to bless us with life? Maybe He is the gate through whom we pass into everlasting life?

So if the tomb is empty…

Paul says, ‘…if Christ has not been raised, your faith is futile and you are still in your sins… we are of all people most to be pitied’ (1 Corinthians 15:17, 19). But he goes on to say, ‘But in fact Christ has been raised from the dead…so also in Christ shall all be made alive…For He must reign until He has put all His enemies under His feet. The last enemy to be destroyed is death.’ (1 Corinthians 15:20, 22, 25-26). And he concludes with the great cry, ‘Death is swallowed up in victory. O death, where is your victory? O death, where is your sting? The sting if death is sin, and the power of sin is the law. But thanks be to God, who gives us the victory through our Lord Jesus Christ.’ (1 Corinthians 15:54-57)

The cross was not the final scene. The tomb is empty! Jesus truly is the resurrection and the life!

Crown Him the Lord of life,
who triumphed o’er the grave,
and rose victorious in the strife
for those He came to save;
His glories now we sing
who died and rose on high,
who died eternal life to bring,
and lives that death may die.
(Matthew Bridges, 1851)

Simon is a maths teacher who works for a charity that provides professional development for new A-level maths teachers. He serves as part of the teaching team and is passionate about seeing people deepen their walk with God through the Word and the Spirit.