Throughout 2019 we are going to share stories of how God has changed people’s lives, starting with two food related stories.

On Sunday June 24th 2018 I attended the service at Jubilee Church while on holidays. Towards the end of the service a gentleman went to the front to pray for healing for some in the congregation who had hand or arm problems. I have had problems with my right hand for about two years. I’d had a cortisone injection but the pain and trigger finger was returning as the Doctor predicted.

I put my hands forward during the prayer and felt a hand on my shoulder. In the next hymn I turned to see who had done it to thank them but there was no one there. God has taken the pain away and is now enabling me to carry on working for Him with my baking for my Church cafe which caused the problem originally (750 biscuits per week). Thank you, Lord, once again for your healing touch! 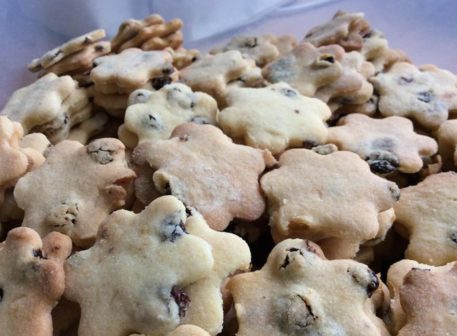 I had struggled with restricting food since being a fairly young child. It came to a peak in 2011, the year that I first moved to Birmingham. I was very isolated, and restricting food and exercising a lot gave me a focus and something I could control. But anorexia is so much more than a ‘diet’ and it seriously affected my physical, mental and spiritual being.

The more I think about it, the more I realise how many lies anorexia told me, and what a paradox it was. Anorexia felt like my friend, it was something familiar, it felt safe, and when I stuck to the ‘rules’ it made me feel ok for a bit. But in reality it was a horrible and even dangerous ‘friend’ – it told me I wasn’t good enough, it told me I was ugly, it told me I should eat even less and exercise even more. It told me that if I was thinner I’d have more friends, when in fact the more it took hold on me, the more isolated I became, as social occasions became increasingly awkward. Anorexia said that if I followed the rules I’d have more peace in my life, but in fact my anxiety worsened. Anorexia was good at convincing me that I was doing the right thing, and that I wasn’t ill, even though family and friends thought otherwise.

Thankfully, with the support of my family I saw an excellent psychiatrist and he referred me to my local Eating Disorder Service. I was a day patient there for just over 6 months. It was a good place to deal with the physical and mental effects, but as statistics show it’s highly unlikely that anyone can recover from anorexia just by restoring weight and improving their mental health.

This is where I needed God. Even though I was determined to recover, only He could break the hold that anorexia had over me. And 7 years later, with no relapses, I am confident that He has. These are some key verses I held on to during my recovery: John 10:10: “The thief comes only to steal and kill and destroy; I have come that they may have life, and have it to the full.” And Psalm 40:2 “He lifted me out of the pit of despair, out of the mud and the mire. He set my feet on solid ground and steadied me as I walked along.”

Sometimes I look back, and wonder what the purpose of this journey was? Perhaps I never will know all the reasons, but I hope at least that this story could give hope to others. To know that you can overcome battles with God’s help, to know that you aren’t alone, to know that God loves you more than you can imagine and to know that His will is for you to live in His freedom. I pray for full healing and freedom for anyone else struggling with an eating disorder.